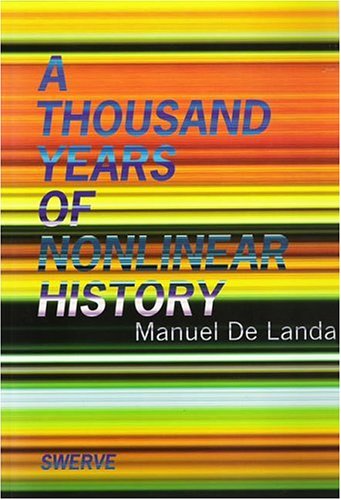 When dipping into a chapter entitled Geological History 1000-1700 AD one would expect to find information on rock types, the development of landforms and possibly the history of the development of geological thought. In Manuel De Landaâ€™s book A Thousand Years of Nonlinear History however, this is not the case – what will actually be found is discussion of Christallerâ€™s Central Place Theory, the development of urban areas in both Europe and the Far East and different philosophical perspectives on these. This aspect of surprise continues throughout the book â€“ De Landaâ€™s approach to all the topics covered is novel, and the insights gained from these approaches are huge.

Although the book is entitled A Thousand Years of Nonlinear History, it is by no means a standard history book â€“ it focuses on the application of historical processes, and generally the passage of time, to many areas within human geography. The most important word in the title is probably â€œnonlinearâ€ as this is the way in which De Landa approaches all the areas covered in his book. It is very difficult to define what is meant by nonlinear – the author takes many pages for his explanation – but simply put it is considering history as a tree with many branches rather than one pure and straight linear course. This idea of nonlinearity is extended throughout the book to cover different types of nonlinear development (such as hierarchies and meshworks) and is used as part of the explanation for many areas of geographical development.

The book is divided into three parts (Lavas and Magmas, Flesh and Genes and Memes and Norms) each of which contains chapters which look at the specified topic from 1000-1700 AD and then from 1700-2000 AD. Sandwiched in the middle of each part is a section elaborating on some of the ideas introduced in the part â€“ for example the Sandstone and Granite chapter within Lavas and Magmas elaborates on the ideas of hierarchies and meshworks, their definitions (within a variety of fields from biology to economics) and their effect on the development of urban geography. As mentioned in the first paragraph of this review, the names of the parts are metaphors for the content within them. For example, the first part is entitled Lavas and Magmas, and this metaphor is explained towards the end of the part by an analogy between lava and the physical constructs of cities. Some of these analogies are rather tenuous, but they all serve to give interesting new perspectives on familiar aspects of human geography.

Although De Landaâ€™s book is very interesting, and in many ways unique, it is also a difficult read. This is really par for the course when one is explaining the sort of complex ideas which are used in this book, and some may find this book completely inaccessible because of the complexity of the ideas discussed. The majority of topics are explained very well â€“ but some topics come across as rather confusing. Also, some of the language is rather pretentious, and one canâ€™t help feeling that some of the ideas are not quite as complex as De Landa makes them out to be.

The presentation of A Thousand Years of Nonlinear History is, like the rest of the book, rather unusual. The striking front cover design makes the book stand out on a bookshelf â€“ although the complexity of this cover design hinders the reading of the blurb on the back â€“ one of the first places a prospective reader will look for information about the book. The choice of font size throughout the book is also interesting. De Landa has chosen to use larger font sizes at the beginning of each chapter â€“ gradually reducing to a rather small font for the majority of each chapter and then increasing again towards the end. I assume this was chosen to accentuate the introduction and conclusion of each chapter â€“ and in some ways that is a good aim. However, this has not helped my reading of the book â€“ or my identification of the important parts of the chapter. It also has the side-effect of making the body of the chapter look very small, and this has made it quite difficult and tiring to read.

Overall, De Landaâ€™s book is a very interesting read. It takes a new approach to almost every topic covered and provides much food for thought. Although A Thousand Years of Nonlinear History should not be used as the main text for any of the topics covered it provides much useful background reading. Some parts of the book are difficult to read and understand, but perseverance will result in appreciation of the new perspectives raised by this unusual book.